Over 2,000 years ago, a tradition united various people for Duanwu Jie, the Dragon Boat Festival. That was one of the major traditional Chinese festivals with Chinese New Year, Qingming Festival and the Mid-autumn Festival. It falls on the fifth day of the fifth month of the Chinese Lunar calendar and this year 2020 25th June and in 2021 year of the Yin Metal Ox it falls on the 14th June 2021.

Tuen Ng is the Cantonese name of the Dragon Boat festival but more commonly known as the Duanwu Jie Festival. 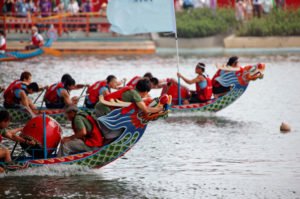 This is a day that marks the celebration of Dragons, spirits, trust and good food! Some highlights of this festival are racing narrow boats decorated with Dragons, eating zongzi rice balls wrapped in bamboo leaves.

There are various explanations and stories about this festival that are celebrated but the most popular saying is the legend associated with the great poet Qu Yuan.

Qu Yuan, an outstanding poet in the late Warring States Period. After witnessing the downfall of his country, Chu State, he declined to submit himself to the other countries.

Therefore, he took his own life by drowning in the Miluo River. After hearing the terrible news, the people who admired him sailed out on boats to salvage his body. They threw in Zongzi dumplings to feed the marine creatures so that they would spare the poet’s corpse along with realgar wine to avoid fishes to come for him.

Qiu Jin, a feminist and woman revolutionist in modern Chinese history. She gave up her life for her country and passed away the same day as Qu Yuan. To commemorate these great poets, The Dragon Boat Festival is also called the Poet’s Day as a way to celebrate their brave and honourable work.

How is the Dragon boat Festival celebrated?

They say during this period, one can do away with hidden health problems and negative energy from your body by having a herbal bath. Usually, these baths consist of 2 items – woodworm 艾草 (ai cao) and pomegranate leaf 石榴叶 (shi liu ye).

They boil the woodworm leaf and soak the pomegranate leaf in the water for a period of time. A shower with this water can get rid of all the negative aura and bring better health and fortune your way.

It is also said to beware of the rain and to absolutely avoid it. Rain and winds this day can bring down your immunity or may cause bad fortune to strike you. 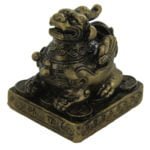 To protect themselves from all these problems, as a tradition people wear talismans to guard themselves against evil spirits. They place positive symbols and sculptures of deities such as the three Celestial Guardians. They consist of Chi Lin, a Fu Dog and a Pi Yao. Chi Lin protects you from the losing relationships, Fu Dog guards you against accidents and Pi Yao (aka lottery God) keeps your wealth safe.

These three deities are considered the best guardians to fight the three killings conflicts. The three conflicts appear in different area of a home or office each year and bring three types of severe misfortunes like loss and destruction. In 2020 the three killings fall in the south and in 2021 it falls in the east you place a Pi Yao in this area each year to appease the energy. They say houses that face this direction in any year are directly under the influence of these conflicts and the reason why you must use annual Feng Shui cures and enhancers.

Using these annual Feng Shui cures and enhancers at your house or office will wade away these negative conflicts and invite good luck and fortune to your doorstep. To drive away all the negative energy, people also burn sage leaves, rosemary, cedar, and other purifying herbs to cleanse the energy of your house.

Why is Dragon Boat Racing Held? 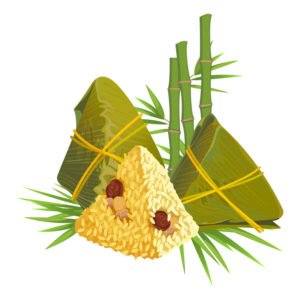 Many say that the Dragon Boat racing tradition dots back to the story of people paddling out on boats to search for the body of the poet Qu Yuan who drowned himself in the river and that’s’ how it became the most important tradition of this festival. Vibrant wooden boats shaped and decorated in the form of a Chinese dragon. As the sound of beating drums fills the air, dragon boat teams paddle speedily and in harmony. They say that the team which wins will have the coming year filled with good luck, fortune and happiness.

Apart from watching Dragon Boat races, eating Zong Zi has become one of the important highlights of this festival. Zongzi is dumplings made with sticky rice stuffed with meats, beans and more fillings. A little bit of rice is moulded into triangle shapes with bamboo or banana leaves and tie them with colourful cords fo silk. There’s no one way of making zongzi and the flavours usually differ from one region of China to others.

Made with fermented cereals and powdered realgar, this wine has now become an important part of Chinese dragon festival traditions!

In the past, it was believed by the ancestors that realgar was the antidote for all poisons, it could do everything from killing insects to driving away bad spirits. Hence to strengthen your body and keep it protected from all these evils, everyone drinks Realgar Wine during Duanwu Festival!

Parents create perfume pouches for their little ones every time when the Dragon festival arrives. Little bags sewed with a colourful silk cloth, filled with perfumes, herbs, medicines and then adding silk threads to hang them. During Dragon Boat Festival it’s not unusual to see little perfume pouches hung around childrens neck or tied in front of a garment as they run around the town. It’s said that these pouches wade off all evil spirits and will keep them safe.

Dragon Boat Festival is held at the start of the summer when the diseases are more common. Mugwort leaves are popularly used for medicinal purposes all over China. Their pleasant fragrance helps in keeping mosquitos and flies. Another similar plant is Calamus. On the fifth day of the fifth month, people clean their houses, courtyards and other parts as to do away with all negative energies that they can. They hang mugwort and calamus leaves on the top of the entrance to discourage diseases from entering their homes. It is also believed that when you hang mugwort and calamus, they bring good luck to you and your family.

It’s a day packed with adventure as everyone comes along to celebrate togetherness and pray for the prosperity of all. The night brings more fun as traditional dragon dances take to the streets and firecrackers light up in the sky as everyone prays for good health and fortune and wish each other 端午安康! (duan wu an kang, wish you safe and sound on Dragon Boat day)! 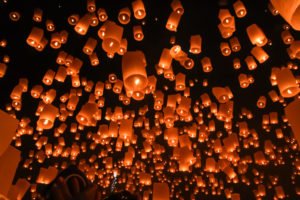 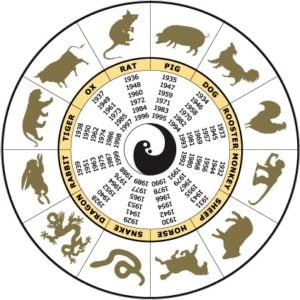 The Pig is going to have to look after their money this month as there is a risk of money loss through lack of care and attention. Try to avoid any big purchases this month and be sure to keep track of spending throughout September. Have a great month. We recently launched a range of […]