How to make the most of the year of the Yang Wood Dragon (Jia Chen) with the 2024 Feng Shui Cures & Enhancers kits.

2024 will bring an enormous shift in energy in every home, office and building across the entire world as we enter into period 9 with all of the Flying stars taking on a new role. In Feng Shui, there are 9 periods of Feng Shui which each period lasting 20 years in a 180-year cycle as follows –

Period 9 Feng Shui will belong to the Li Trigram (fire element) and in period 9, we can expect a lot of prosperity and progress for females; especially the middle daughter of a family. Period 9 will also bring a lot of fame, happiness and recognition to all genders and we will see a big rise in celebrity influence from social platforms such as Tik Tok etc. 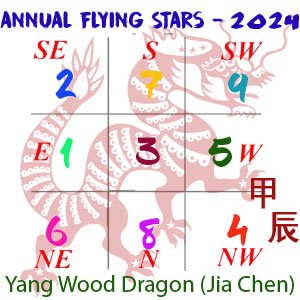 Chinese New Year 2024 will begin on the New Moon and according to the Lunar calendar, this will be on the 10th of February in 2024. The Lunar New Year will take place after the Winter solstice and the event is celebrated by millions of people from every single corner of the world. The Chinese New Year is very much a time of new beginnings and a fresh start to life for the year ahead. The New Year is a time of family celebration and the majority of the event is a time for family to reunite and come together to see the New Year in. Below you will find everything you will need to know about Chinese New Year 2024, year of the Yang Wood Dragon…

It should be noted that there are five different types of each Chinese Animal (fire, water, wood, earth, metal) which depends on the year you were born and each different animal will have different predictions for the year ahead; you can find out more about this in our 2024 Feng Shui guide which should be released in November 2023 so please be sure to check back on this page.

The degree of this influence varies from one person to another. One of the major considerations is the heavenly stem of the year in which one was born so if you were born in 1932 or 1992 which would be a Water Monkey, the year will not be bad at all.

Holidays and observances in China in 2024

Amongst these official holidays are four traditional Chinese holidays, which is always subject to the lunar calendar. The double third festival is on April 11th 2024 although this is only celebrated by Zhuang Nationality in Guangxi Zhuang Autonomous Region.

Although the solar (Hsia) calendar commences the New Year at the beginning of Spring, which usually falls between the 3rd and 4th of February, the lunar (Yueh) calendar marks the New Year on the second new moon after the winter solstice.  Celebrations and festivities for the Chinese New Year are held on this date. In 2024, the Lunar Chinese New Year, also known as the ‘Spring Festival,’ falls on the 10th of February 2024. 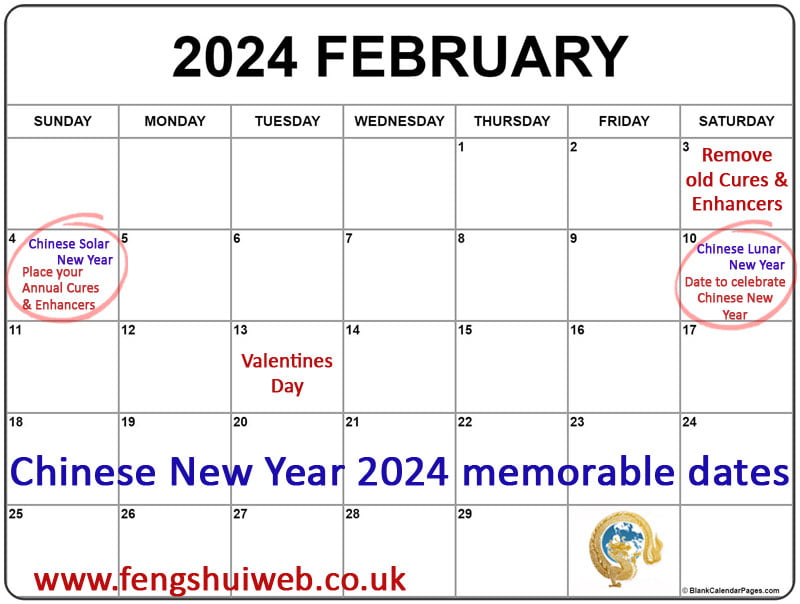 December is looking to be a good month for the Dragon with much to enjoy. One area that will require care this month is the Dragons health and well-being; the Dragon will need to avoid stressful situations and dangerous activities. Have a fantastic month. We recently launched a range of Gold plated Chinese Animal Protection Talisman […]

22 Years of free Feng Shui Tips, Secrets, Advice and Cures on every Feng Shui topic from Wealth, Health, Love, Home, Business, Family and so much more… Welcome to our extensive and valuable Feng Shui resource, you will find many articles on learning traditional and authentic Feng Shui. These articles are not full of gimmicky […]