Period 9, beginning in 2024, will be the true test of a Feng Shui Practitioner’s knowledge and experience, as there are not many around who have been through different 20-year cycles of a period. One of the most significant advantages of getting older is you gain more experience and Feng Shui cures that worked in period 8 will not necessarily work in period 9. In fact, most have to be changed entirely, and for the last six months, I have been rewriting our Feng Shui software 81 flying star combinations to allow for this, and it is taking forever to do, but we hope to release a software update at the end of 2022 to give you plenty of time to prepare.

The primary star in period 7 was the #7 star, and I remember so well 30 odd years ago activating the #7 star to enhance wealth and health and even relationships however if you activated this #7 star in period 8 or, worst still, period 9 it can cause health, wealth, relationships, and many other issues and why it is essential to place your annual Feng Shui cures and enhancers every year.

So, what is Flying Star Feng Shui or Xuan Kong Fei Xing? 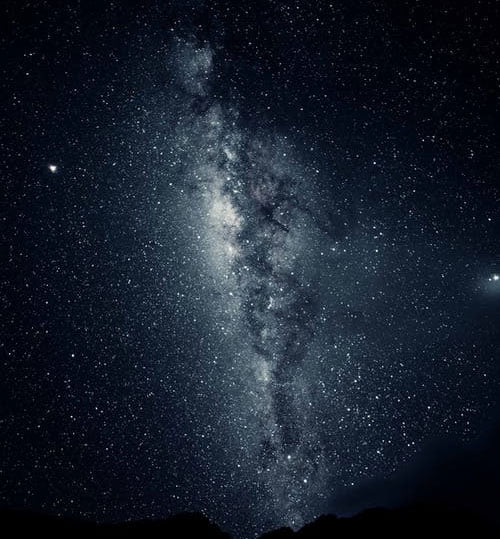 It is one of the most popular Feng Shui methods in use today. It is classical Feng Shui, having achieved widespread popularity in the 20th century. Flying Stars Xuan Kong is a system that will allow results to be felt quickly over a long period, although you must understand the 81 combinations of the flying stars to get the best out of this powerful system.

The Flying Star system of Feng Shui allows a practitioner to create a diagram illustrating the patterns of Qi occupying a building, much like an astrological chart can show the influences upon a person.

Advanced Feng Shui Masters can even utilise the information in this chart to predict events that are likely to happen or have already happened to the property’s residents and obtain details about the occupants that the practitioner had no prior knowledge of and the reason why when I do a Feng Shui consultation on a home or business I do not want to know about the problems you may be having or had.

Once I have taken compass readings, determined your facing direction and studied your land formations outside I can tell you exactly what is going on now and in the past and you should be wary of a practitioner that asks in advance of you looking at your home or business what has been going wrong or right in your life.

A worthy Feng Shui practitioner will only need an address, contact number, birth dates and times if known by all occupants and where in the world you were born, a floor plan and a nice cup of tea are always welcomed.

Flying Star Feng Shui is a subset of Xuan Kong Feng Shui, which is itself a subset of the San Yuan school of Feng Shui. The name “Xuan Kong” means “mysterious and void”.

In the late Qing Dynasty, an Imperial Scholar named Zhang Zhong Shan added commentaries to Jiang’s works, and thus information about Xuan Kong Feng Shui became more accessible. Zhang then founded his school, called Wu Chang Pai. Many masters came from this school, including Tan Yang Wu, one of the first scholar-practitioners of Xuan Kong Fei Xing. Tan Yang Wu removed many redundant parts of the Xuan Kong theories of the time and supported his efforts with case studies.

His works include Da San Yuan Xuan Kong Lu and Da San Yuan Xuan Kong Shi Yan, both of which were published in the early 1920s. Around this same time, another scholar named Shen Zhu Ren took an interest in Xuan Kong. He broke with the tradition of using flowery, poetic and cryptic language when writing about Xuan Kong, and authored a book called “Mr Shen’s Study of Xuan Kong”, or Shen Shi Xuan Kong Xue.

This work organised, complied and interpreted the works of Zhang Zhong Shan into an easy-to-understand format. Shen Zhu Ren was also credited with discovering the Flying Star method during his studies of Zhang’s work. He stripped out many unnecessary concepts, simplifying Xuan Kong Feng Shui. His book, published in the early 1930s, remains one of the most widely referenced texts on Xuan Kong Fei Xing to date.

Enhancing, weakening and destroying cycle for the Flying stars

For each of the nine Flying stars, we can either enhance, weaken or destroy them based on their influence in the current period. For example, if we wanted to enhance the #9 Flying star in period 9, we would introduce wood cures and colours into the sector that this star falls into to enhance this auspicious star.

You can see on the charts below how each element affects the other when it is present in an area of the home. It is worth noting that the destructive cycle is more specialist than the enhancing and weakening cycle and requires better knowledge from a Feng Shui Master. 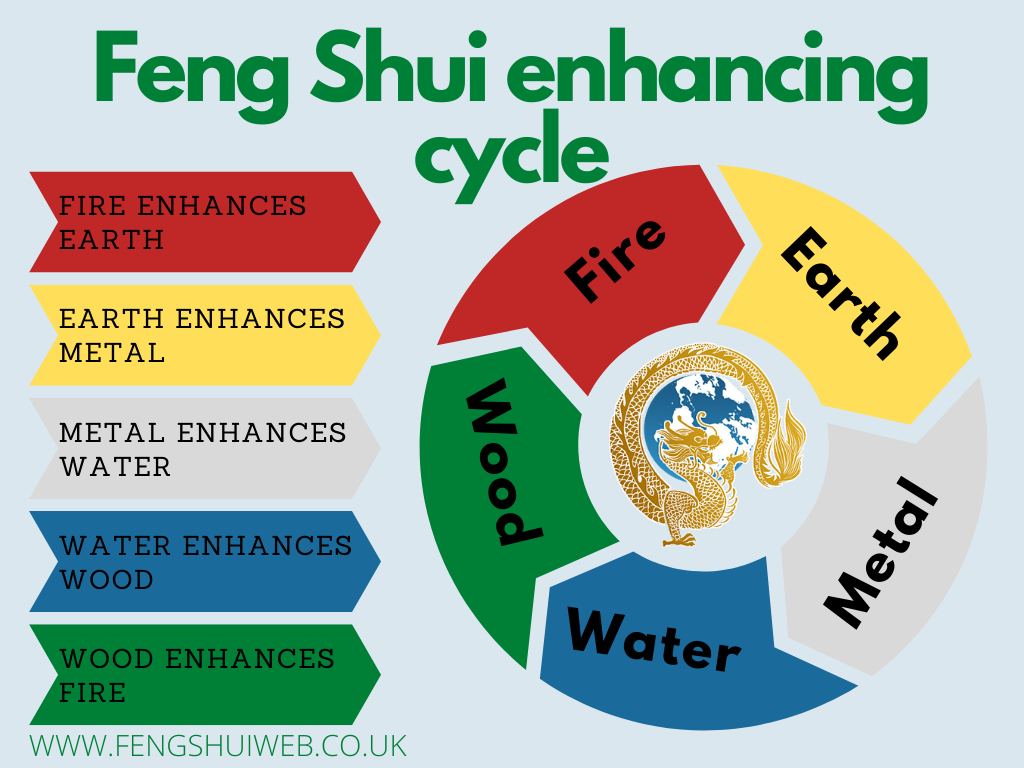 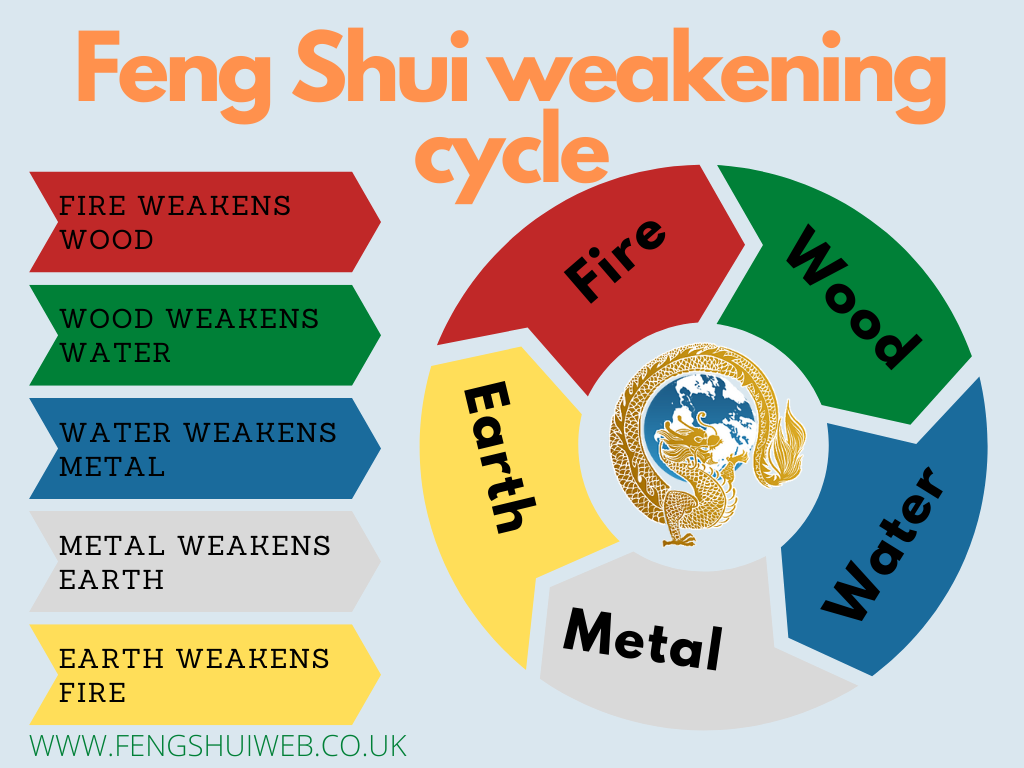 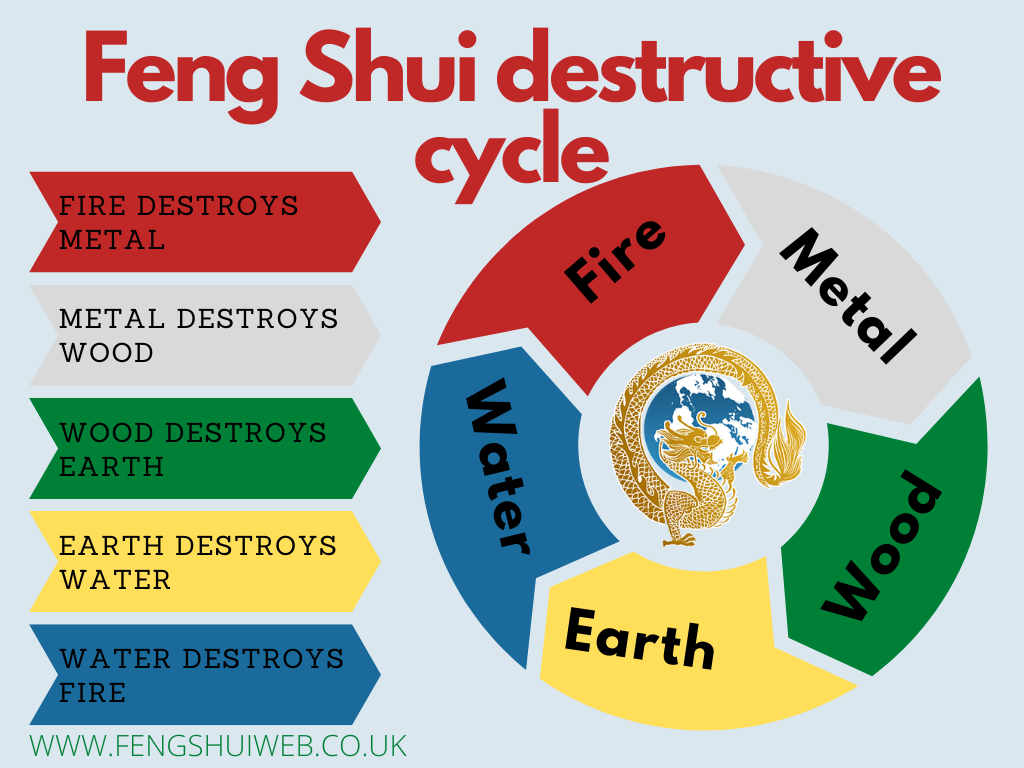 The Factor of Time

The name “San Yuan” literally means “Three Cycles”, indicating its focus. The San Yuan system takes into account time, location and direction in its application. The three Cycles referred to in the name last 60 years each, so the collection of three cycles lasts for 180 years. Each 180-year Great Cycle is divided into nine, 20-year Periods and into an Upper Cycle, Middle Cycle and Lower Cycle of 60 years each.

The effects of Qi undergo a major transformation every time the Period changes, so it is necessary to alter one’s Feng Shui to keep up, especially now as we enter period 9 in 2024.

Most of the time over the last two years (started during the first Covid lockdown) has been spent updating my client’s homes and businesses and also updating this website along with our Feng Shui software and the reason why I very rarely take on new clients as most of my time is taken up with looking after existing ones from the last forty years.

It is believed that the period of the Cycles correlates to the time that elapses between relative alignments of the planets Jupiter and Saturn, and as you will probably know, we are currently living in the eighth period of the Lower Cycle of the current 180-year Great Cycle. In the year 2024, the period will shift to 9, and the effects of the bodies of Qi will shift in a major way. You can refer to the below chart to see when each period in the current Great Cycle began: 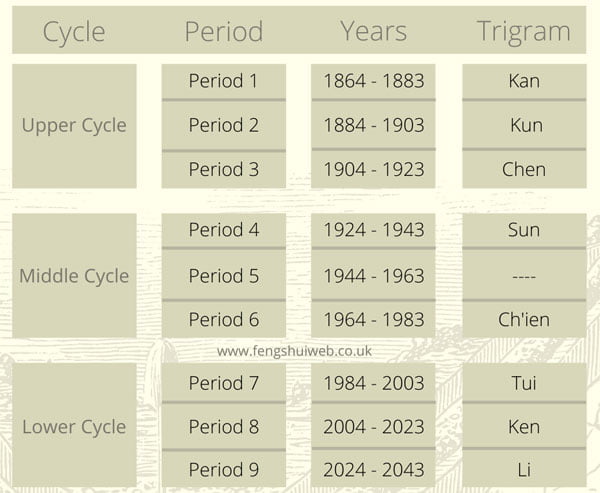 So if I have had a Feng Shui consultation between 2004 and 2024, period 8, will I need to change my Feng Shui cures and enhancers?

Most probably, as you would have been activating the #8, 1, 4, and 6 stars for health and wealth, and from 2024 you will need to start activating the #9 star along with the #1, 2, 8, & 6 and this is why we have to rewrite our Feng Shui software to allow for this and of course, we will keep you updated so stay tuned!

Take a look at our constantly updated period 9 pages to keep up to date and worth bookmarking as it is updated frequently. 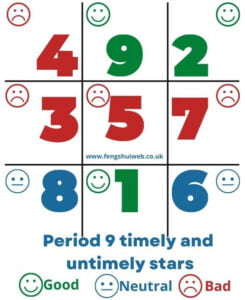 5/5 – (2 votes) Everything you need to know about Feng Shui period 9 Xuan Kong Flying star   It does not seem that long ago that I first started preparing for period 8 back in 2002. I remember sitting on a beach in Ko Samui, Thailand thinking about what this new lower cycle period […]

Chinese Animal Predictions For 2007. Year of the Pig – Boar (Ding Hai) © Written by Michael Hanna 2007 CLICK HERE FOR PRINTER FRIENDLY VERSION I know there will be many Dragons out there who will be glad 2006 is close to ending, my youngest son Daniel is a Dragon and his year was pretty […]

Kan 1 White   In 2013, Kan (Tang Lang) trigram flies comfortably into the north. Kan#1 is a water element. In the physical body it is the ear. Internal organ it is the kidneys and it is also blood. It also affects career and overall luck. In 2013 it is a lovely timely star and is […]

Ox – April 2021 Chinese Animal Predictions The Ox is looking to have a varied month in April with a mix of good and bad luck although with a little care, there is nothing to worry about. It would be wise for the Ox to avoid dangerous situations this month as there is a risk […]