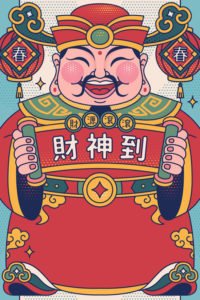 Tsai Shen Yeh is also affectionately known as the God of fortune in Mandarin. The term translates to the God of Wealth, also known as Cai Shen Ye &  Zhao Gongming. Chinese Culture recognizes him as the main God of wealth. Legend says that Tsai Shen Yeh descends from heaven every Lunar New Year to check on and inspect his devotees. People worship the God of Wealth in the early morning by inviting him to their house by offering incense. They indulge in dumplings on this day, which resemble ancient blocks of metal.

Legends also say that after all the sacrifices are offered to Tsai Shen Yeh, the God proceeds to heaven on the 2nd day of Lunar New Year. A tradition that people hold is that they burn the picture they used to welcome him on the eve of the New Year to see the deity off while praying for a more fortunate coming year.

In 2021, year of the Yin Metal Ox Xin Chou Tsai Shen Ye is one of the most essential annual Feng Shui cures and enhancers to place in the southeast to protect your wealth and good luck. In 2021 he should be placed in the southeast, although in my opinion and in my home and business, I have three of them in my home, one in my office, living room and dining room, and two in my business. You must only use a gold coloured Tsai She Yeh and not tempted to use a red one.

In our 2021 annual Feng Shui cures and enhancers kits, we have decided to include this as standard in all our kits as it is so crucial in this year.

Different Forms of the God of Wealth

Probably the most popular figure of them all. This avatar is the most well-respected by Chinese people around the world. Zhang Gong Ming is another name he’s known by. It is believed that he brings good fortune to people and safeguards them from any disasters.

The most common depiction of Tsai Shen Yeh is him riding a tiger with an ingot in his hand.

(Choy San Yeh) is also believed to protect your wealth in times trouble.

If you have heard about the three kingdoms, you must also be aware of the very famous Guan Yu, who also goes by the name Guan Gong. This avatar is well-loved by those who actively participate in businesses. It is also said that it’s presence doesn’t just protect you from any harm but also aids you and steers away competition from your path as you head towards achieving financial success!

God from the five directions

They say this deity comes from five different directions—one from the east, one from west, north, south, and the middle, respectively. Also known by the name Wu Lu Cai Sheng, it is believed that he ensures that good luck and fortune always finds its way to you no matter where you go.

The Chinese God of Wealth has a unique role when it comes to drawing wealth and fortune towards you via the methods of Feng Shui. The deity is often depicted as carrying a scroll or an iron tool or riding a black tiger, and they say he possesses the power to turn rock into gold.

In Feng Shui, it is believed that Tsai Shen Yeh brings forth great luck, prosperity and can bless the souls with good luck for an entire year. Any life that he touches is blessed with fortunes beyond your imaginations.

The God of Wealth is an important Feng Shui figure in any home for those who pursue great wealth in terms of stocks, gambling, high-risk investments, and more.

Are you looking for some Feng Shui cures to bring the wealth god to your home? We’ve curated a list of these cures for you.

The Placement of the deity

Paintings, figurines, sculptures of the God of Wealth, and his forms can be placed carefully at various parts of your house to invite the God and ask for his blessings. It is essential to place them in the most prominent wealth locations, and if you follow Xuan Kong Feng Shui, you will place him where your number 8 & 9 star are located and if you follow eight mansions Feng Shui you would place him in the southeast. When using this vital figure on the annual cures, you must place him where the #5 star is located; in 2021 this is in the southeast.

If placing them at altars, ensure that they’re looking out of the window or towards the skies. If that’s not possible, then you can also place them facing the main door. Placing the figure either directly or facing your entrance from the side will bring major transformations of your chi that travels to the entrance into wealth energy. Placing them a place where everyone can see the figure is also advised. It’s said that via this, everyone will be blessed by His opulent presence. It will attract wealth luck towards your house and your office.

Place the figurine at the far back end and burn incense in front of the altar. Placing a row of 3 teacups in front of incense with a plate of offerings of sweets in between. Although these rituals may vary from place to place, usually the front row consists of tea and the second row with wine made of rice.

Always remember that deities must never be placed in such positions where their figures are confronting you directly. E.g., Putting them in a place where you will be directly looking at them is not appropriate. Avoid placing them in common areas where you might look directly at them like work desks, TV, dining tables & more.

It is advised to keep deities behind you or just by your side rather than in front. That is because they’re supporting you with the energy of fortunes.

Always remember to never place the God of Wealth in places like the Bathroom, Kitchen, or at lower positions such as the floor.

Which directions are the best? 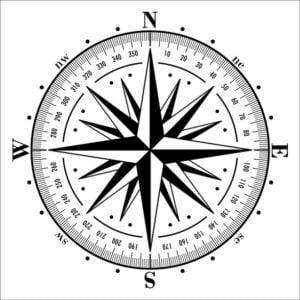 If you want to get more detailed, then it’s time to whip out that compass. It is said that the best area to place the wealth god is the north. The energy of water is looked at in harmony and synonymy with money in Feng Shui.

Apart from the north, the 8 trigrams of the Taoist cosmology also consider the southeast a good wealth region. Here the deity will improve your luck in financial issues and ensure that great fortune comes your way in life.

The stance and overall look of the statue are so very important, and why we spend so long sourcing our cures as the Tsai Shen Yeh statue, we sell took us ages to find. If the auspicious figurine has other creatures for display with them, then it’s necessary to pay importance to their status and ensure that it’s reflected in the way you place them.

We usually see the God of Wealth riding a Tiger, and hence it’s crucial that the God is placed at a higher pedestal than the tiger to reflect their seniority. The God may feel like his power is threatened. It signifies that the God is being given a lower status as compared to other creatures.

The God of Wealth has an imminent role to play in feng shui, especially for those who are looking for ways to become successful in their financial projects. The diety’s presence blesses your every role and serves as a symbol for people to seek new opportunities in whatever work you take on. Like they say, keep working hard and good things will keep coming your way.

2 thoughts on “The God Of Wealth – Tsai Shen Yeh”

Characteristics of the Water Horse

Characteristics of the Water Horse: 1942, 2002 Are you prepared for 2021? The water Horse has a friendly nature and brilliant sense of humour and is able to talk intelligently on a wide range of topics. They are great in business matters and are quick to take advantage of any opportunities that appear. The Water Horse […]

Rate this post Hi everyone, I hope you are all well. Here is the Free Feng Shui Tong Shu Almanac for Saturday 27th – Monday 29th April 2013 Wishing you all a great day, Daniel Share110TweetEmailPin1