Feng Shui and the many facets of
Chinese culture and religions

Before I embark on writing some of my recollections of various cultural rituals that I grew up with, I think I have to explain a little as to how it all came about and, without delving too deeply into the intricacies or delicacies of religions, how we Chinese adopted such a colourful mixture of doctrines, beliefs, religions and philosophy.

Taoist culture is a living manifestation of an antique way of life which existed thousands of years before the first Chinese dynasty. One of the ancient Taoist sages, Chuang-tzû himself makes frequent mention, in many texts, of its traditional founder, Huang Ti, the Yellow Emperor who belongs to China Golden Age (2852-2255 BC).  Taoism itself encompasses amongst other things, poetry, cosmology, yoga, meditation, self-cultivation, philosophy and folklore such as “Bà Hsien” (The Eight Immortals) “Chang Er” (The Moon Goddess) to name but a couple. Much of this folklore is excitingly enigmatic.

Feng Shui or Geomancy stemmed from the time when ancient Taoist sages devoted much of their time to “cultivating the Way” and meditation. Through their serene contemplation of nature’s working, they not only recognised that yin and yang exist in nature but that nature goes through a process which bears a resemblance to the interaction of the five elements, fire, earth, metal, water and wood. They also observed these sometimes conflicting forces at work and learned to predict the outcome or to manipulate them without tampering with their inherent properties. This is the art of “Wu Hsing” (the Five Phases) which is not so much elemental but as an active concept which implies “activities” and which plays a very important role in determining the temporal energies of a given situation.

It was many centuries later that Confucianism and Buddhism became part of Chinese culture. There also exists an ancient folk religion with which I am not familiar but it is said that much folklore is heavily intermixed with this religion and Taoism at a certain level.

Most ideas of Confucianism are based on strict moral principles, family devotion, “Er-Shi-Si Jiao” (filial piety), ancestor worship and the strict application of social rules. Whereas Taoism perceives simplicity and modesty of the heart as the way to a balanced society, this is where Confucianism and Taoism parted company. It was in 206 B.C. during the Han dynasty that Confucianism became the religion of the empire and till today, it is Confucian ideology that has moulded the character of China.

Buddhism came to China in A.D.68. In the fifth century Buddhism was made the official religion by the Northern Wei Dynasty when they took control of Northern China. It is not surprising that most Chinese have been simultaneously Confucian, Taoist, and Buddhist. I include myself here although I am not religious. I do believe an order of beings exists in another dimension and that it is a matter of expanding our own perception in order to “see” that reality.

Ancestor worship is of the highest order. It is an obligation to pay respect to the elders, even after their death. My mother had maintained the family altar after my father passed away, until the day my eldest brother (the “heir” in Chinese culture) got married at which time the family altar was moved to his new family home. He assumed the responsibility of continuing the worship rituals of our ancestors and of teaching his son the importance of it. (Although not religious himself, he is very dedicated to Confucian doctrine.) On visiting our brother’s home, our first duty is to pay respect to our ancestors. Special tributes are offered on the first and fifteenth day of the lunar month. This is part of our daily life.

Within this worship, there are two very important festivals. One is “Qing Ming” on the third month of the lunar calendar (around April) and the “Souls’ Month” that falls on the whole of the seventh lunar month (about August).

The Chinese place special significance on burial sites, as they believe that the quality of the Feng Shui of their ancestors’ graves determines the destiny luck of their descendants. This is Yin Feng Shui, which places importance on the Early Heaven Pa Kua Arrangements and is very different from the kind of Feng Shui practitioners use for yang dwellings, our home
or office.

“Qing Ming” literally translated “Clear and Bright” is a festivity day for grave clearing. The family meets early in the morning and sets off to the burial sites or Commemoration Hall of the ancestors after a ritual of offerings at the family altar. Armed with baskets full of buns, fruit, cooked food, rice, wine, incense and flowers, we begin the search for the sites. I remember it being a very hot, sweaty and smoky experience. The burial sites of my ancestors are located on hillsides so there was a lot of climbing up and down searching amongst overgrown grass in the equatorial heat of Singapore. Upon reaching the burial site, the food would be offered and respects paid; we would proceed to clear the site of dense undergrowth. Men with sickles made their living on this day by helping families to
cut down the undergrowth. To ensure a comfortable life in the spirit world, paper items like shirts, trousers, watches, money, gold and silver ingots made from joss paper and sometimes luxuries like houses and boats were burnt as offerings to our ancestors. The day would end with everyone sharing the food at an enormous family meal with mah-jong to follow.

“Souls’ Month”
spans the whole of the seventh lunar month where the spirits of the dead are to roam free in the realms of us mortals. Deceased kin return to the family home (where the family altar is housed) to feast on the offerings that are placed usually on the 1st and 15th day.

During that month, most households would paste scripted charms with protective power on their front door panel to keep wandering spirits from entering the house.

Adults and children alike are to take extra care during this month. Children were discouraged from many outdoor sports such as camping, swimming, climbing etc for fear of being harmed by restless spirits. To further ensure our safety, we were given a talisman for protection to keep with us at all times.

One of the main features during the Soul Month is Chinese Opera (Tà Sì), performed on a make-shift wooden stage. They are a delight to watch and I have often wondered how the performers keep all that face paint on in that heat and humidity. Now get this, these Chinese Opera groups performed from one district to another on a weekly basis originally for the benefit of the “Souls” but it attracted such a large and dedicated “live” audience that their appearances were often looked forward to during the year. I was so enthralled by the performance myself that I enrolled in a Chinese Opera course for a brief period. Sadly, my voice was too low and I never got to sing the female part which would have enabled me to dress in one of those awesome costumes and headdresses.


This festival is a tribute to the Moon Goddess “Cháng Er” who was the daughter of the Jade Emperor of the Heavens. Story has it that Chang Er fell in love with a peasant from Earth and spent most of the time with him. Her love for him was so great that she was willing to drink an elixir to enable her to become a mortal to be with him forever. 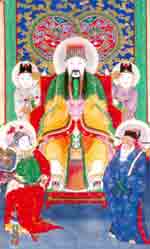 To this day, village folk gather in the village square to admire the moon which is at its zenith, and to eat moon-cakes, a round thin dough cake filled with red bean paste. It is really delicious and rich in that a little goes a long way.

If you have friends who are Chinese, sit them down for tea and ask them to recall some folklore for you. Many would have forgotten but most of them can still tell you some interesting stories. I have forgotten many details myself but thanks to my friend Cherry Chan who is from Shanghai and has helped me to recall and fill in the missing bits and facts.

You may find a slight variance in the version but generally the storyline is the same and almost all of the folklore tales involve “Sien Ren” literally translated as “spirit being” or “immortals”. You may also find some of the folklore too far-fetched but let’s give our forefathers the benefit of the doubt, given that perhaps, in their generation, stories were embellished in order to enlighten the younger generation regarding the existence of another order of beings (in their terms ‘deities’ although such have no religious connotations). Alas, our scope of perception continues to limit us and we in turn put a lot of these folk tales down to superstition and naivety.

When we were old enough to question the credibility of folklore, my mother used to say; “Perhaps it isn’t all superstition, maybe our forefathers thought this was the only way we would understand the philosophy. Maybe they are telling us something, ponder on that”.

This is an extremely small section of snippets from our Academy of Feng Shui software and Tong Shu Almanac software. This page will be added and updated every day for you all. The best place to start is the Chinese Animal Almanac – Each of us is associated with one of the twelve Chinese animals […]

October 2018 Almanac (Tong Shu) October 2018 9th Month Ren Xu (Yang Water Dog) Starts from 8th October 2018 to 6th November 2018   A Chinese almanac (Chinese calendar) or `Tong Shu’ ‘Tung Sing’ is based on the lunar cycle, providing a guideline that either promotes or advises against certain tasks being undertaken on certain days depending on the combination […]