“Nothing we learn in this world is ever wasted.” 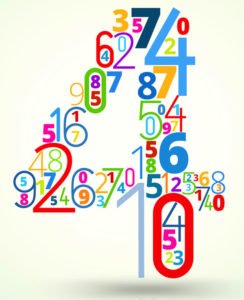 The Chinese are very superstitious when it comes to numbers, they choose telephone numbers, house number, business numbers, car number plates and anything that has numbers in very carefully.

Every month we get to visit many homes and businesses on consultations and it amazes us how far our clients take Feng Shui almost to paranoia, which is not good. If you have bad numbers do not worry about it, as I will show you how to eliminate the inauspicious effects.

A little story, to begin with, last Friday night I was parked outside the cinema waiting to pick up my two boys and as much as I hate to admit it I was listening to BBC Radio 4. I know you always think of the Archers or such like and this is what my Grandma used to listen too, they have some great debates on some nights.

Anyway, this program was about superstition, and one of the interviewers was saying how she was not superstitious but had spent the last 30 years saluting magpies or never walking under ladders or the cracks of pavements. Well, numbers and Feng Shui, are more superstitious Chinese folklore than anything else, do I take it seriously? Yes and no, if I found the perfect Feng Shui house with a good facing direction and it was good for my family but the house number was number 4, I would still buy it although I have to admit I would use the countermeasures listed below.

The main reason these numbers are considered unlucky is that the way the numbers sounds when spoken specially to the Cantonese. An example in western numbers would be the #11 could sound like heaven or #8 sounds like weight or #1 sounds like son, do you see what I mean? So if you have an unlucky #4 and you are from a country other than China. Think of #4 as sounding like “more” which is great. 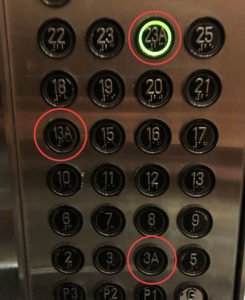 How seriously is numerology taken around the world?

While on a recent trip to Kuala Lumpur, I checked into my hotel and was given my room and floor number and took the lift up to my floor (23A). It took me a few seconds to realise what was going on until I noticed that any floor level with a 4 in it was listed as 3A or 13A etc.

I spent three days in Kuala Lumpur while on the final part of my honeymoon tour and noticed the avoidance of the number 4 all throughout the trip; there would be no number four option on a restaurant menu, no four in a street address and many more times over the three days.

There are many other numbers I have read about that are considered unlucky in my opinion this is “cannon fodder” and just written about to fill books, if you think about it you could go on for ages, #4 when spoken in English sounds like door, more, store, bore, jaw, paw and “SAW” which out of all of these sounds the worst

How to tell if your house number is good or bad

Let’s say your house number is 2391; you would need to add all of the numbers up until they equal to a single number which in this case would equal to 6.

Let’s say your house number is 395; you would need to add all of the numbers up until they equal to a single number which in this case would equal to 8.

Let’s say your house number is 85 you would need to add all of the numbers up until they equal to a single number which in this case would equal to 4.

If your house number has a 4 in it, I would still suggest putting a circle around the number when it is displayed to weaken the effect. 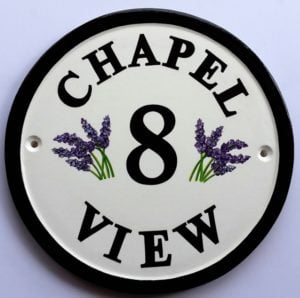 If you own a home or business with a 4 or 13 is to draw a circle around the number, seriously it is that simple. The circle is extremely powerful and encloses the inauspicious effects of a negative number. So if you have a house number 4, a cheap way of curing is to go outside and draw a circle around your number or if you have time and money pop down to your local hardware store and find one of those ceramic door numbers that you can customise with a circle around the number, all this time you were worrying about nothing.

How seriously do we take numbers? I would be over the moon if we found the perfect house with great flying stars and it was #8 or 88, but I would not be put off buying it if it were #4 or 13, I would use the cure as above though or change it to a house name like “rose cottage” etc.

Michael has a car number plate with #88 in it; our fax number has three #8’s our telephone # has double nine, so yes we are superstitious a little but not paranoid about it and using the countermeasures above negate the problem, so please do not waste any energy worrying if your house number is 4 or 13, remember in many European countries #13 is very lucky and in Xuan Kong flying star #4 is a romance star. Also, remember how far do you take it, both Michael and I were born in the fourth month of April, could this be bad? If you divide 8 by 2 it equals 4, you can play with numbers all you like and make them work good or bad.

879 thoughts on “Feng Shui and Numerology”

Rate this post Hi everyone, I hope you are all well and are enjoying your day. Here is the Free Feng Shui Tong Shu Almanac for Friday 28th March 2014. Wishing you all a great day, Daniel   How to use the Tong Shu Almanac 28 constellations -This is a powerful date selection method giving fortunate […]