Feng Shui Store > About me

Our resident Feng Shui Master Practitioner, teacher, author and researcher Michael Hanna is one of the most sought after Practitioners in Europe and worldwide and has helped thousands of people from all over the world transform their lives for the better.

A true measure of our success and knowledge is the fact that we are consultants and teachers to other Feng Shui consultants from around the world. As well as busy Practitioners we also founded and run the world famous International Academy of Feng Shui, attracting students and Feng Shui Practitioners from all over the world including the United Kingdom, United States of America, Canada, Thailand, Iceland, Spain, Ireland, Estonia, Switzerland, Singapore and Hong Kong, to name but a few. Over the years we have built an enviable client base ranging from Princess’s, Ladies and Lords, Sir’s, Count and Countess’s, Doctors, lawyers, some very famous clients and companies. We have consulted on Manor houses, Mansions, flats, apartments, studio’s, mobile homes, homes in UK, USA, Canada, Thailand, Ireland, Scotland, Wales, Singapore, Japan, Australia, Germany, Spain, Belgium, France, Bosnia, Hong Kong, Hawaii, Sweden, Holland, Greece, Dubai, Switzerland, Austria, Malaysia, companies employing thousands of staff, small and large restaurants, hairdressers, financial houses, brokers and even a fish & chip shop. You name the type of business we have probably done it.On top of all that Michael and his team are the creators of the world’s most powerful Feng Shui software, used by hundreds of Feng Shui Masters, Practitioners, Students and thousands of Feng Shui enthusiasts from every part of the world you can think of.

Michael and Lillian Too at her home in Kuala Lumpur Malaysia. Michael (top row, left hand side)with some of his students in Buckinghamshire. 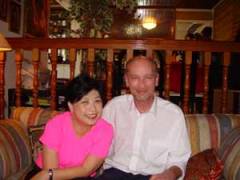 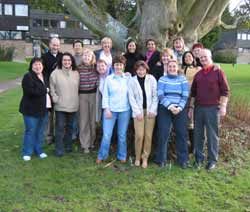 Michael was born in Hong Kong in 1958, married to Josephine (the owner of this site) for 27 years with two wonderful children. Travelled the world many times over and his longest journey, Feng Shui began in 1979 and since then he has been greatly honoured to have been personally trained to Master Practitioner level in Malaysia by world famous Lillian Too, Master Yap Cheng Hai Feng Shui Centre of Excellence, Master Joseph Yu along with hundreds of books and still taking time out to further study this vast skill, all are exceptionally highly regarded and experts in their field, although some practice slightly different styles (same schools) of Feng Shui which has been a major advantage for Michael in his practice as the balance between them all has enabled him to practice a traditional, classical and also modern approach to this intricate art.

2 thoughts on “About me”

The Dog’s month is looking very prosperous and those in work can do very well with transactions in January although be sure to check the Tong Shu Almanac when dealing with big transactions to make the most of things. The Dog can enjoy great relations with others this month. Have a great month. We recently […]

This is only a general perspective guide for the twelve earthly branches of the Chinese almanac for July 2013. In this post, I have attempted to point out the factors that may affect you beneficially this month and also those of which you should beware of according to your animal sign. The effect on individuals […]

Rooster – September 2020 Chinese Animal Predictions The Rooster is looking to have a fairly mixed month during September and may find that the month comes with its share of ups and downs. The Rooster can do a lot to avoid problems during September by taking their time when making decisions as this could help […]