Feng Shui Store > China – Everything you need to know about Chinese culture, etiquette, protocol, visiting, doing business and communicating in or with China

China – Everything you need to know about Chinese culture, etiquette, protocol, visiting, doing business and communicating in or with China.

I was born in Hong Kong in 1958 and I know that there are many protocols, values and traditions that the Chinese hold close and since I still travel a lot in Asia on Feng Shui consultations and teaching I thought I would share with you common mistakes that many foreigners make whilst either visiting or doing business in or with China. China is known as a state of etiquette, custom, respect and ceremony. To understand the Chinese, some consideration of their way of life should not be ignored:

The Importance of keeping Face:

Roughly translated as ‘good reputation’, ‘respect’ or ‘honour,’ one must learn the details of the concept and understand the possible impact it could have on your doing business in China and many other Asian countries.

The concept of ‘face’ roughly translates as ‘honour’, ‘good reputation’ or ‘respect’.

There are four types of ‘face’:

It is critical that you give face, save face and show face when doing business in China.

Confucianism is a system of behaviours and principles that stress the obligations of people towards one another based upon their relationship. The basic system of belief is based on five different relationships:

Confucianism stresses duty, sincerity, loyalty, honour, respect for age and seniority. Through maintaining harmonious relations as individuals, society itself becomes stable. The founder, Confucius is a Chinese philosopher (551 ~ 479 BC) who taught morality, loyalty and strict social relationships. Confucianism especially accentuates social relationship codes between the young and the old, men and women, the royal and the common people.

Generous gift-giving is a significant part of Chinese culture in the past. Nowadays in business, official policy in Chinese business culture forbids giving gifts; this gesture is considered bribery, an illegal act in this country, so if you are giving gifts to a government official please be very careful.

You may find your gift declined, although these days’ times have relaxed more and you will find that the Chinese will decline a gift three times before finally accepting, so they do not appear greedy so you will have to continue to insist. You will be expected to go through the same routine if you are offered a gift.

It is appropriate to bring a gift that is representative of your country, town or region, to a business meeting or social event. A gift should always be wrapped but please read the list below of acceptable and unacceptable gifts, this is very important. Always present the gift with both hands as a sign of courtesy and always mention that this is only a small token of appreciation. Do not expect your gift to be opened in your presence.

A very auspicious gift to give is a pair of Fu Dogs; these are protected animals and a very thoughtful gift. Fu Dogs are extremely powerful protection for a home or business; you will find most homes or business in China complemented by a pair either inside or outside. They come in all shapes and sizes and some of the homes I have visited all over the world display some of the most magnificent pairs I have seen especially the ones in Asia. Probably the most impressive is from Beijing’s Forbidden City, these are really amazing to see. If you follow this link you will find more details on Fu Dogs and the correct way to display them which is very important. 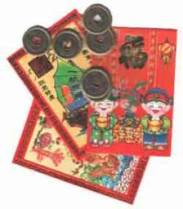 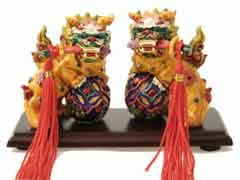 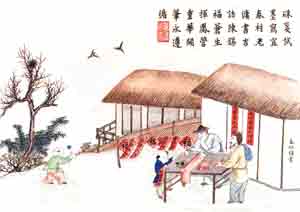 I love eating in China and most other Asian countries, it is an event and if you are being entertained by a local the experience is so much better. On my Feng Shui travels around the world regardless of what city you are in, the restaurants are very commercial and never a true reflection of what the local food is like, on a recent Feng Shui consultation in Barcelona I was visiting an old client of mine who has lived in Spain for seven years (emigrated from the UK) and even he struggled to find a traditional Spanish restaurant that served a good paella, I wish I had not asked for one as it caused embarrassment for him. The next night we ended up in his local restaurant that was very basic but served the best quality food.

Tipping is becoming more commonplace, especially with younger workers although older workers still consider it an insult. Different parts of Asia have different rules, in Singapore generally, you do not tip at all whereas in Malaysia it is considered rude not too.

There are some useful Chinese expressions easy to learn:

Dress styles are changing quickly in today’s China. Most City Chinese will wear a western-style suit and tie for a business and even less formal meeting. It is best for foreigners to dress formally. Women should avoid low necklines and hemlines that rise above the knee. Jewellery will be noticed; modest gold jewellery and a quality watch and shoes will count in your favour. However, avoid overly expensive jewellery or showy ornaments.

Business cards, called name cards (“Ming Pian”) by the Chinese, are presented when everyone first meets. They should be given and received with both hands. Although common practise in most western countries, never slide your card on the table to your Chinese contact, it is viewed as extremely disrespectful. Never toss or “deal” your business card across the table, as this is also considered extremely impolite. Receive a business card with both hands and scan it immediately. Then lay the card in front of you on the table. It is demeaning to put someone’s card directly into your pocket without looking at it first.

Climate: The weather is incredibly diverse; tropical in south to sub arctic in north.

China’s national flag was adopted in September 1949. This flag was first flown in Tiananmen Square on October 1, 1949 the day of the founding of the People’s Republic of China. The rectangular flag has a red field with five golden-yellow stars (each with five points) in the upper left corner. The star on the left is larger than the other four. The red colour of the flag symbolizes revolution. The large star symbolizes the Communist Party (which rules China) and the smaller stars represent the people of China. 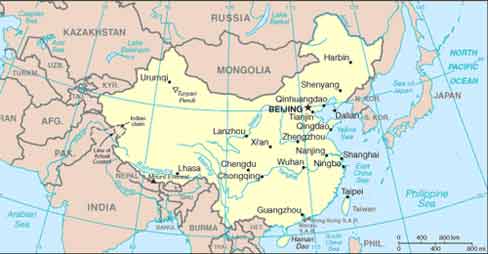 Geography – note: Fourth largest country in the world after Russia, Canada, and US; Mount Everest is on the border with Nepal and is the world’s tallest peak.

Chinese New Year (according to the lunar calendar) starts on the 31st January 2014 and is celebrated by the Chinese all over the world. It heralds new beginnings and a fresh start.

At a social level, it is very much a family affair, a time of reunion, forgiveness, sharing and thanksgiving. In 2014 Chinese New Year falls on Friday, January 31st 2014 at 05.40 (am) China (Lunar calendar), Thursday 30th 21.40 the United Kingdom, Thursday 30th 13.40 California USA, and Thursday 30th 22.40 Barcelona Spain. Due to time differences around the world, Chinese New Year will fall what appears to be a day early in some countries.

The below copyright information does not apply to anyone who wants to copy our content or send to a friend or even store on your computer for their own personal use and development. Please feel free to copy and paste or share with as many people you like. The below is intended for the many people who steal our content and claim it to be their own work.

Copyright law protects this material. We are more than happy to share our content, all you need to do is ask our permission and agree to give us credit for our hard work and a link back to our website. Contact michael@fengshuiweb.co.uk for more details.

A valuable guide on how to increase wealth, good luck and avoid debt problems in the year of the Snake 2013 using Feng Shui secrets, cures and enhancers.

A valuable guide on how to increase wealth, good luck and avoid debt problems in the year of the Snake 2013 using Feng Shui secrets, cures and enhancers. © Michael Hanna 2013 “Resentment is like drinking poison and waiting for the other person to die.” It appears we are out of recession one day and […]

The Snake may find that relationships with other could be problematic in December and they may find arguments and complications taking place with others. The Snake should try to avoid confrontation with others in December, especially during the festive period. Have a great month and a fantastic Christmas and New Year. To enhance 2014 take […]