A childhood memory of the philosophy of Feng Shui

I grew up in a very superstitious environment where although my mother is a practising Taoist, the teachings of Taoism at her time had been shrouded behind the veil of Buddhism. Hence, we participated in many Buddhist ceremonious rituals performed regularly at home. Because Feng Shui dates back to such a distant time that stories often re-told became myth that a great deal of folklore was assimilated into the practise of Feng Shui.They were fascinating stories. However our upbringing was in total accord with Taoist philosophy.

My mother understood that, as in the natural world, we could live in perfect grace, harmony and truth by recognising and accepting the changes of life. Her philosophy was: to take “all good and bad as it comes with grace”, count our blessings when good things happen and respond but not react to the bad things that come our way. Mother Nature will always give us both good and bad; keep the good with gratitude but let the bad pass, learn the lesson from it and let it go.

This philosophy kept her strong bringing up seven children on her own after my father passed away when we were young. My mother also applied concepts of Feng Shui to avoid misfortune and help maintain a balanced spatial and temporal harmony in our lives. Basic to her belief is the conviction that one must not wait passively for one’s share of good fortune, but must actively strive to attain optimal spatial and temporal relations.

With seven children to raise in a small apartment in Singapore, it was not easy to follow the Feng Shui principles laid out in the Eight Mansions theory. As a result, the Four Pillars (Ba Zi) and Xuan Kong system of Feng Shui were central to her quest for spatial harmony.

My mother was often seen holding a pocket-size black and red notebook that contained the birth information of all her children. She was constantly examining the “eight characters” of our birth dates whenever something went wrong with us in education or behavioural problems. I do not know whether the behavioural changes attributable to growing up and the pains that came with it were taken into consideration, but my mother fervently believed that there was something more involved and that the cycle of the energy of the year or months has a particular influence. Many times over when she found that a particular cycle of energy was in conflict with our year or daily pillar, she would suggest colours to wear for support or to nourish our personal element. 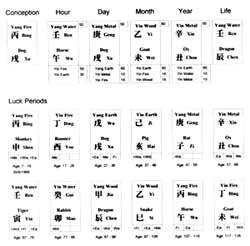 The eight characters, also known as the Four Pillars or Ba Zi, relate to the year, month, day and time of our birth date, each of which is expressed in a set of paired characters. Each of these pairs consists of one Heavenly Stem and one Earthly Branch; taken together, they are critical in determining whether the configurations are in harmony with the temporal and spatial elements.

The almanac was another very important manual frequently seen in my mother’s hand. Auspicious dates have to be chosen carefully to determine when we move house through the different stages of our lives or even to negotiate a day to attend an interview for a new post or travelling abroad. The principle behind it is to make sure that the interaction of these temporal elements is in affinity with our Four Pillars, otherwise, nothing works and we find only obstacles in our way.

An almanac is a Chinese imperial calendar, which provides a guideline that either promotes or advises against certain tasks being undertaken on certain days depending on the combination of the Heavenly Stem and the Earthly Branch. The ten Heavenly Stems are the five elements of water, wood, fire, earth and metal. The Twelve Earthly Branches are the twelve animals of the Chinese astrology: rat, ox, tiger, rabbit, dragon, snake, horse, sheep, monkey, rooster, dog and pig. The stem and branches express each other in a 60-year cycle in terms of the five elements in their yin and yang states.

My Feng Shui training on the principal concept of “The Tai Chi”- understanding yin and yang, evoked certain memories of a story told when we were young which allows me now to see the correlation between the two. The essence of it is widely explained in this way:

“The Tai Chi” can be as small as a grain of sand or as large as the universe, there are no limits. Where two forces co-exist – tangible and intangible, they encompass the six energies, the five phases and a myriad of objects and forms.

In ancient China, Feng Shui was taught to disciples at a very young age through the recital of poems “shi-jing”. Their interpretations and meanings were shrouded in archaic language aimed to keep its secrets only for the devoted few.

In those days, the practice of Feng Shui was not only a matter of finding a suitable site for a dwelling, but the actual building tasks also had to be taken seriously in terms of sequence and timing in order to ensure harmony. The best dates and hours to carry essential tasks – felling trees, breaking or levelling the ground, setting the base, aligning the ridgepole of the roof, tiling the roof, digging the well and finally moving in, required prudent attention to heighten harmony and forestall adversity. They believed firmly that human modifications of landscapes do not simply bring about surface changes but create conditions that influence and even control the fortunes of those who occupy the site.

In modern days, Feng Shui is practised less prudently. Many of the construction stages of, and the division of space within, a dwelling are very much out of our hands. For this, it is important to remember that the best time to consider the application of Feng Shui for a dwelling is during the architectural planning or interior design stages.

To practise Feng Shui correctly, understanding the fundamental concepts and the tools of its philosophy is crucial. The Pa Kua, the Lo Shu Square and the interpretation of the eight trigrams of the I Ching are the three basic tools.

An eight-sided symbol that corresponds to the four cardinal and four secondary directions of the compass. The south is always placed at the top, unlike a conventional compass. However, north is still magnetic north whether you are in the northern or southern hemisphere.

The division of the eight-sided symbol, apart from the eight cardinal and secondary compass directions, has a Tai Chi in the middle that represents Earth. This division is called the Nine Palaces and the energies that exist in these nine palaces interact with each other. Those who reside within feel their effect. Interpreting the interactions of these energies is complex.

Each direction of the Pa Kua (Ba Gua) represents principally a trigram, a season, an element, a shape, a colour and a life aspiration. Accordingly, it is possible to activate any of these life aspirations to benefit the residents. Nature’s workings depend upon a system of fine balances among processes that may assist, hinder or block one another according to the relative strength of each in a given situation. 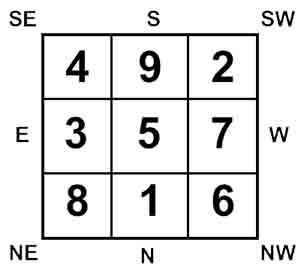 A three by three grid where nine numbers are arranged in such a way that the three numbers added together from any given lines, vertical, horizontal or diagonal always give the result fifteen, the number of days required for a cycle of a new moon to a full moon.

Some of the most powerful Feng Shui formulas are closely related to the mysterious secrets of the Lo Shu Square like the Xuan Kong and Nine Star Ki to name but a few. Whichever formulae are used in an analysis, none deviates from the fundamental principles and rules of Feng Shui.

The Eight Trigrams of the I Ching

The eight trigrams are roots of the I Ching 64 hexagrams. Each has its own multiple sets of meaning, connotations and symbols. The meanings and implications of the trigrams give valuable clues, which can be implemented to create balance and attract auspicious Feng Shui.

Once we appreciate the underlying and basic concept, we will begin to see that Feng Shui adopts a very sensible approach to our relationship with the environment and personal living space. The challenge of Feng Shui practises lies in its many theories, methods and interpretations.

The problems in children pertain to disobedience, lack of concentration in studies, lack of confidence and security. Feng Shui can be applied to resolve these situations.

By analysing the map of their Four Pillars, an experienced practitioner can discern the lack of or excess of elements within the map and thereby recommend a balanced presence of elements within their living space. Usually, a colour change to the walls of their bedroom or a reorganisation of furniture is sufficient.

Often a change to their sleeping or sitting directions, according to the Eight Mansions Theory, can provide great improvements in behaviour.

Two well-used antidotes employed by my mother during our school days;

To contact Sallie for a personal or on-line consultation:
consultations.sallie@fengshuiweb.co.uk.

You will find many articles on learning traditional and authentic Feng Shui. They teach you how to use cures and enhancers that nature provides us with, mainly the five elements. As many of you long time subscribers will notice some of the articles are taken from our monthly newsletter. I hope you enjoy them, we will be adding to the resource on a regular basis.

Find out how the October 2021 Feng Shui Chinese Animal Predictions can help you make the most of your month and make the best choices.

Rate this post Hi everyone, I hope you are all well. Here is the Free Feng Shui Tong Shu Almanac for Saturday 20th – Monday 22nd April 2013 Wishing you all a great weekend, Daniel Share389TweetEmailPin1